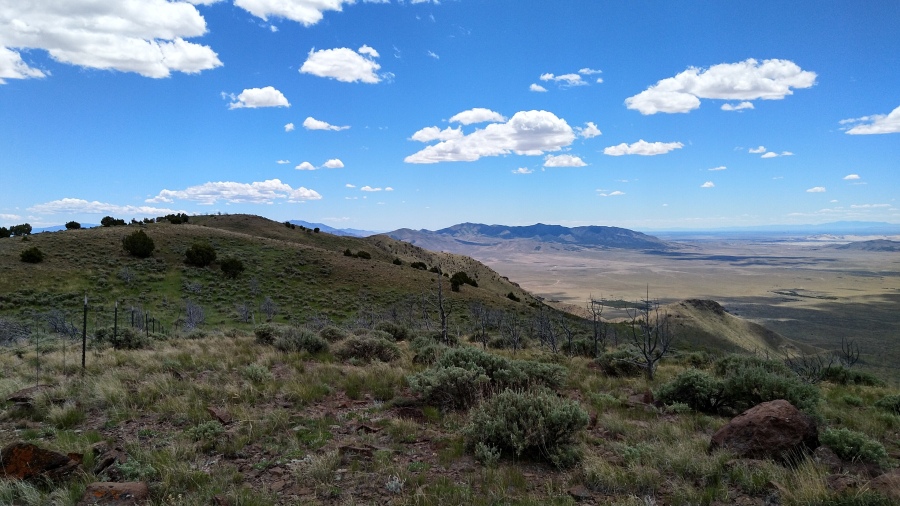 There aren’t many trails listed in this area but the opportunities are there for those willing to take the pathless walk. My day started on a trail and ended on a peak of who’s name I don’t know for certain, though a name was lightly etched into the USGS survey marker: “Ferner” followed by ‘1947’ which is either the elevation or the year this particular marker was placed. It almost seems rude to climb a mountain without even knowing its name.

I followed the paved roads for an hour and a half to get into the vast and dry expanse, before being led down a winding dirt road suitable for a 2WD sedan or wagon.

Opportunities for camping exist here in many places, though a camper should heed the warning of the landscape: Fires have happened here, fires will continue to happen here, they don’t need assistance from humankind where the threat of lightning alone is enough. I can only imagine what the scenery was like before the trees were scorched, but it must have been beautiful. It still is in its own way, the view of the slopes is unhindered and made route selection a simpler task.

At the trailhead there is an oasis where the greenery gives way to cooler air and much welcome shade. A group of sheep seemed to have made their home here, munching on the lush green grass.

Along the trail you’ll note some greenery rebelling against the color palette of the local flora, welcoming with its cool shade. A person could know it a mile away from the scent alone.

As you ascend the trail ends at a unique rock formation that follows the same rolling motion of the surrounding hills. They are an interesting sight, but my eyes were set on the mountains ahead. I push beyond the trail and into the tall grass where my eyes and ears were set to rattlesnake prevention.

With so many peaks to choose from – some near and some far – all I could decide on for the moment was to follow the canyon up and make a final decision as the landscape unfolded before me.

When chasing a mountain summit, it’s hard to maintain presence and appreciate what you see along the way. After fighting tall grass and dodging sagebrush, I found a circular clearing with a tree standing watch over it. At a time, this must have been a wonderful place to sit in the shade.

After following the sloped edge of the mountainside, I opted to hop down to the ravine and follow that upward. The local cows had also ordained that the easiest way up to the pass; who am I to argue their knowledge of the landscape? I followed their tracks to a vast expanse near the top.

What I thought would be the edge of the mountain unfolded into an ever-reaching vista with rolling sagebrush-green hills and the ever-prominent Uinta mountains standing guard over the small towns below in the distance. It reminded me of my plans this summer to hike across the long spine of dramatic and beautiful mountain ranges of Utah, to see all there is. A moment of mourning for the lost opportunity gave way to appreciation for where I was.

The locals were less than enthusiastic about my presence. As I passed by I softly talked to them trying to assure them I was just walking through. They responded with low grunts and shortly running away in large groups. As I walked away and made my way up the mountainside, I could hear them screaming and hollering in the distance, calling their council among the trees back into session.

And up I went.

As I ascended, the desert sank below me.

And a perfect ridge line manifested into existence.

And so did the end of my climb. The summit ahead blocked by a rock wall I was in no mood to deal with at that particular moment had me settling down on the peak I’d already ascended, and I figured it was as good a place as any to stop. Some mountains are a better view than they are a summit at any rate, and I liked this particular view just fine.

As I wandered around the summit I found a survey marker where I assume the mountain was named ‘Ferner’. A look over maps post-hike didn’t reveal much more information on this particular summit. Ferner has a weird ring to it that I’m more or less particular to.

After admiring the view, I made my way down the ridgeline that bounced and wound its way back to the parking lot where I could follow the dirt road back to my car. Instead of leaving immediately when I got to my car, I decided to stop at a small forest near the mouth of the canyon and let my post-hike muscles settle in the hot sun and dry desert wind.

The western desert of Utah is not as obviously dramatic or striking as its southern counterpart, what with the likes of Zion and Bryce and Arches to contend with the competition ends quite fast. Though there’s something to be said for the calm beauty of it all. It has no need for striking canyons and structures carved out of the terrain over thousands of years of wind and water erosion. It has soft dry grass, shallow green forests, a rare oasis to be found, and an expanse of unending dramatic mountains begging to be climbed by those seeking something more than the end of a trail.

The west desert is a priceless gem in our modern world. Largely uninhabited and full of forgotten views and sometimes inaccessible by trail. A hiker works for their views in this place in more ways than simple physicality, the result is the rewards are far greater and a person develops a strong connection to the land they travel. I will be spending more time here, it’s worth that at least.

One thought on “Ferner Mountain”