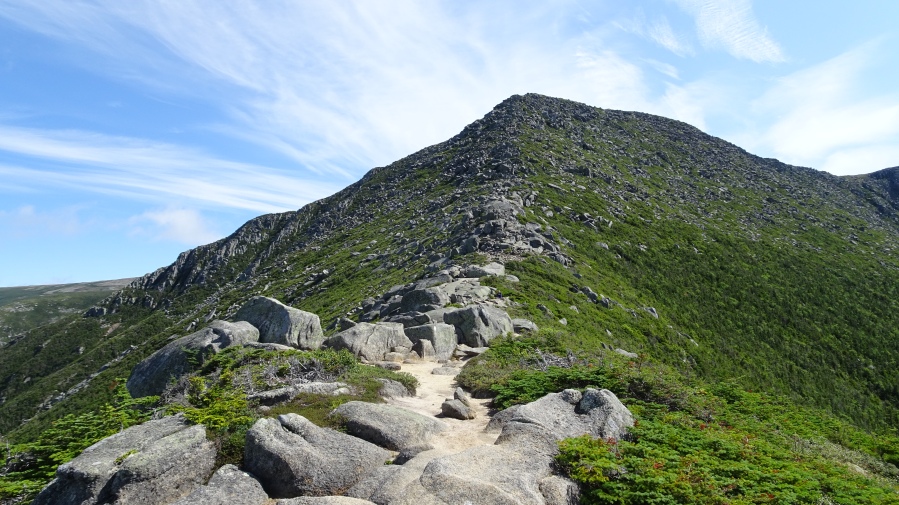 After a very unfortunate battle with Greyhound, I was finally unleashed onto the small town of Bangor, Maine at a gas station/restaurant.  I had just one more bus to take which was a smaller local operation, meaning it would likely be run more effectively thank god.  I went inside, purchased a ticket, and with a couple hours to spare I went inside for my first proper meal in days and had probably the best cheeseburger of my life.  I occasionally looked out the window at all the trees in the distance feeling ready to start my hike.

After my meal I went outside and waited one last time for a bus to arrive, and it even arrived on time!  We made some stops here and there to pick up/drop off locals, and soon I too was dropped off in Medway, a tiny place just on the outskirts of Millinocket, which is where I needed to be.  As I got off the bus I heard a man ask me if I was Jackrabbit.  He worked at the hostel I’d be staying at and was there to pick me up.  I was so happy to be in the final leg of my journey to start.. well.. my journey.  We drove down the quiet highway into the even-more-quiet town of Millinocket.  It was Sunday and everything sans the bar was shut down for the day.  We arrived at the hostel and I was given a tour, given a lecture on the rules, etc.  I chose a bed and started fumbling with my gear outside on the porch.

I’d been told the hostel was basically all full, but it was very quiet there.  I chatted with a man who’d finished his AT hike in the way of sections over the years, then there was a group of women who’d come to hike what would be the first stretch of my attempted thru-hike:  The 100 Mile Wilderness.  I talked with a few of them about what to expect, how they liked it, etc.  They were all on a high after finishing their hike and seemed really happy with the experience in spite of suffering a case of hiker hobble, limping around after their long hike.  After I’d gotten my gear settled and had enough of socializing I left the hostel and wandered around the quiet town, where I was reminded of the town of Bishop along the PCT where Exo and I spent most of our time from sunrise to sunset wandering around the town.

“I’m really doing this again” I thought.  I was content in the way that long distance hikes make you content.  I felt like I’d been holding my breath ever since my adventure last year ended, and that I could finally take in a huge lungful of damp-pine scented air in yet another little town who’s tourist population relies on outdoor enthusiasts.

After my stroll I went straight to bed, suddenly heavy with the weight of essentially not sleeping since I hopped on the bus from Salt Lake City, Utah.  I passed out immediately, and woke up early the following day to meander down the road to get my complimentary breakfast plate from a diner down the road as part of my SOBO hiker special at the hostel.  It tasted even better than what I’d had at the restaurant the day prior.  After I finished I walked back to the hostel, got my gear, and waited outside for the shuttle ride into Baxter State Park to start my trek.  While waiting I met a hiker named Honeybee.  She was doing a flip-flop hike to ensure she was going to hike through Maine under the best weather conditions, she was nearly done with her hike.  We didn’t talk much since she was on the phone with her family, but she was really nice and easy to get along with.

The hostel owner came out, we hopped into the shuttle, and we made our way into the park.  While he drove he gave us the low-down on everything/anything.  The dwindling moose population, making sure you have enough time to descend the first major obstacle of a SOBO thru-hike on the AT: Katahdin, how he started his hostel, etc.  Before long we arrived at the ranger station, got our permits in order, and we all went off in different directions.  I stopped by my reserved campsite to see if a dude I was sharing it was still there, instead I ran across another couple hikers who stayed there as well who said he’d left the previous day.  Ah well.  With nothing else left to do, I made my way up the trail. 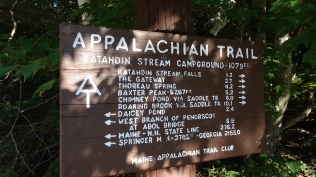 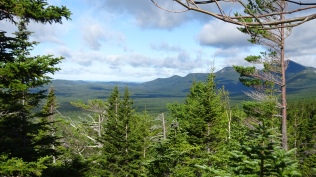 Overall, Katahdin isn’t the worst mountain I’ve ever summited in terms of difficulty.  I mean, it was definitely strenuous, but not so much so that I basically collapsed when I got back to camp.  The first leg within the treeline is laden with stairs and obstacle courses around big boulders, and once you break the treeline it’s basically a scramble straight up to something called The Gateway:  A small flat area before you hit your second vertical scramble.  There I ran into Honeybee who was happy to see a familiar face.  She was a little uncomfortable about some of the obstacles we’d done to get that far along, as was I.  For the most part it was straight forward:  Look above, grab a rock, climb up on said rock, repeat.  But there were a couple of parts where you had to use metal handholds to ascend further, and I personally couldn’t reach them, so each time I had to kind of gamble.  At one point I basically had to fall forward towards a steep decline to grab onto one, which was a little hair raising.  Having someone else around to climb with was nice. 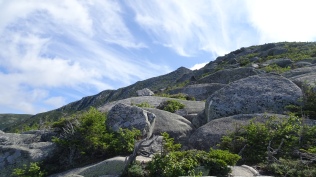 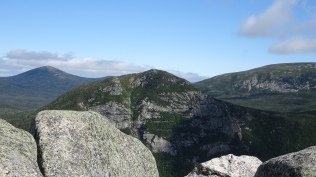 We made it up the second scramble and arrived to The Tablelands.  Katahdin is basically a really big mountain that had the top of it chopped clean off.  The Tablelands were just a massive flat stretch that went on until you got near the summit where you had a modest climb to reach the famous wooden sign all the AT hikers stand on to get their start/finish photos.  When we got to the top there was a huge crowd of folks and a line to get your summit photo, so we waited our turn and did the AT hiker photo thing.  Despite doing the whole hiker vlog thing, I don’t really like having my picture taken, I really don’t take very many selfies, etc.  I’m at my most ungraceful when someone else is taking my photo because I don’t know what to do with my hands.  I can’t for the life of me do the ‘victory’ pose and have it look normal.  So I just kinda stood at the sign and gave a thumbs up because.. what else is there?

The descent was easier than the ascent in a technical sense, but physically I was a little tired.  My legs are pretty well conditioned at this point, but this mountain was a full-body workout.  Eventually we happily reached the end of the scramble and made our way down the trail which still had its obstacles.  At some point I stopped to drink some water and let Honeybee continue walking.  I’m not a very ceremonious person, I didn’t shout after her to wait or anything, I just stopped and she kept going.  I wanted to go my own pace down the hill because I didn’t want to screw up my knee like I did last year on the PCT.  I kinda like that about long distance hikes:  You’re out there to do your own thing.  You meet awesome folks that are fun to hike with, but if you want to be alone at any given point you just do it and the majority of folks won’t really bat an eye over it.

Oh I didn’t mention:  I started this hike sick.  It was at least a severe cough, at worse it was maybe bronchitis.  So with a couple miles left in my day the cold was starting to catch up with me.  I was feeling really foggy and stumbled down the trail with spaghetti legs, wanting to just reach my campsite already so I could eat and go to bed.  I noted that time seemed to move slow on this trail because you have no visual point of reference as to where you are or where you’d come from, so the two miles felt just short of an eternity.  But I didn’t mind too much, I was happy I’d reached the top and started my trek.

I got into camp, ate some food, set up my bed in a lean-to, watched the sky turn dark from under my quilt, and fell asleep. 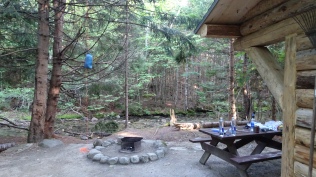 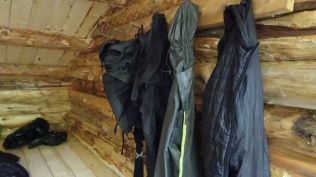 Day 1 is the most vivid and exciting part of my short 115 mile stint on the AT.  The rest of my hike will be covered in the next post, because honestly not much else happened.