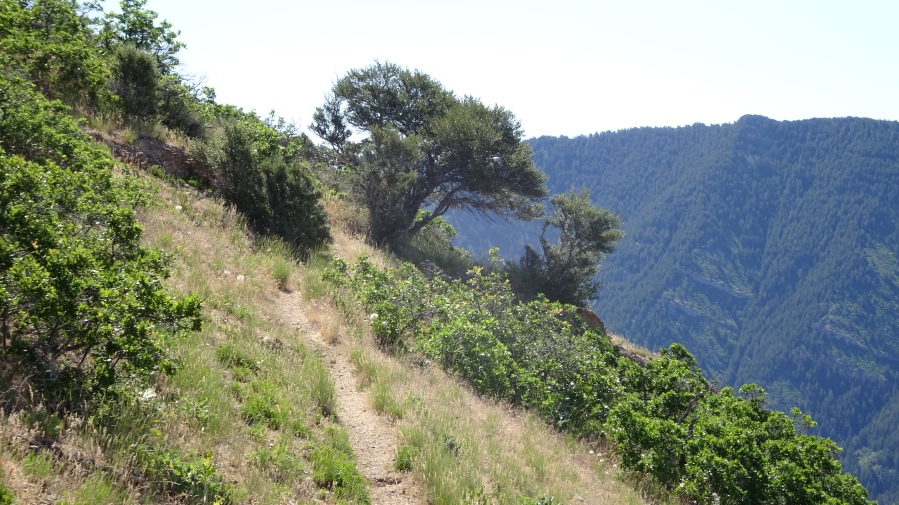 A while ago I posted on here with ambitious plans of climbing 12,000 feet and crossing a 40 mile chunk of mountains.  What actually happened wasn’t the funnest time I’ve ever had hiking.

I started at around 7:30 and started my ascent from above the state capitol building near Ensign peak, a very modest 10 minute hike to a wonderful viewpoint.  I headed east towards the mountain range and was very promptly met with a lot of ‘up’.

I went up two unassuming yet horrifically relentless hills up to a radio tower and was met with a very serene walk along some tire tracks through grassy flatland for a period of time before I went downhill, only to just shoot back up again.

As I pushed on the trail became less and less maintained.  The sun got hotter.  The inclines became more severe.  The ridgeline became more intense.  It got to the point where the majority of my time was spent not falling off cliffs that I couldn’t even stop to drink water anymore, so my throat got drier and drier.  For obvious reasons I didn’t have my camera out during the scarier parts of it.

I found momentary solace on top of a hill with a nice flat top on it to take a break and guzzle water.  I set out on this hike with six and a half liters of water to make it 20 miles to an alpine lake.  I had already gone through three and I was only five miles into my hike.  Not even when I hiked through the Mojave in a heatwave did I ever go through that much water in such a short span of time.

I looked down the hill and noted the steep downhill I’d have to tackle.  I drank a little more water and thought over my plans.  There’s no way I’m making it the rest of the way with only three more liters, which means I have to get off the ridgeline, hike into a canyon, and get to a stream somewhere.  A mile ahead was a place called Rudy’s Flat which linked up to the North Canyon Trail (which I’d done this winter, luckily I knew where I could find water).

For about an hour and a half I dreamed of what Rudy’s Flat would be like, stuck on the ridgeline.  I dreamed about a groomed trail as I pushed through thick foliage, my only sign of the ‘trail’ being a couple broken branches here and there from either previous hikers or wildlife.  As I exited the dense brush I looked up at the top of the hill beside me.  It was covered in rocks I couldn’t hope to climb.  I looked ahead of me and noted I was getting cliffed out (I couldn’t continue forward as there was a cliff).  My only choice was to backtrack and climb up a ways to get to solid rock I could then climb up and follow the crest around to the arm of the mountain.  As I pushed up I noticed the dirt was incredibly loose and each of my footholds slipped out from beneath me with each step.  I started to panic a little bit, so I grabbed onto a branch and held myself there for a moment to figure out a better way up, to which there was none.  I put all my strength into each footstep and dug the side of my shoe into the side of the mountain to hopefully prevent more slipping, and was finally able to grab onto a rock to pull myself up on.  This amounted to basically the most terrifying scramble I’ve ever done, but I made it up and was soon making my way down the hill only to go straight up the next one.

I was elated as I made my final approach to Rudy’s Flat.  There was more bushwhacking ahead of me, but I didn’t mind because I’d finally get to take a break in some actual shade.  I’d spent the majority of my day on the exposed ridge-line, and the temperatures were hitting in the 100’s.  I cruised my way through the brush, pushed through some branches, and was spit out onto a nicely maintained trail, and from there the hiking was easy.  I collapsed in the first campground I could find, guzzled some water, and made some mac&cheese with sriracha poured all over the top.  The thought of hiking down the North Canyon Trail just to get water then come all the way back up killed me inside, but I really didn’t have much choice.  I took a couple hour break before packing up and heading down to the stream.

I flew down the trail with ease, filtered another six liters of water, then flew back up the trail.  I’d spent all day thinking I’d gotten weak somehow, that my hiker legs were gone.  I just realized the immense difference in hiking on an actual trail and basically punching my way up and along a mountain ridgeline.  I got to camp, set up, and looked at my maps trying to figure out what the next day would be like.  I looked at the mountain towering above me and couldn’t see a practical way up, which didn’t do wonders for my already weak psyche at the moment.  I put the doubt aside and decided I’d deal with it tomorrow.

I hung around camp for a while, ate dinner, then climbed into my tent.

I’ve cowboy camped my fair share of times.  I’m not particularly afraid of bugs.  But I laid down in my tent (which isn’t fully enclosed, it’s more of a tarp with a door.  No bathtub floor or anything), and noted the amount of ants crawling around.  I noted the type, and remembered my days chilling out in the desert on the PCT, in the Sierra.  There were really big ants that were basically just giant assholes who would bite you and wouldn’t let go, and it hurt like a motherfucker.  I moved to brush some of them off my quilt, then I started getting bit.

I’d spent the majority of my day baking in the sun.  It took me 8 hours to only make it 7 miles along the route I’d wanted to do, I had to backtrack and go downhill/back up because my water needs were insane.  I was still feeling the dehydration despite guzzling some water, I was feeling doubt due to some pretty scary moments through the hike I’d just done and I wasn’t sure I wanted to tackle what may amount to be the same kinda stuff, or worse.  Then, in the safety of my own tent, I’m attacked by biting ants.  I got out of my tent, packed up my shit, and went home.

I’m a bit disappointed it didn’t turn out the way I thought it would, but the fact is I’m still a bit of novice at stuff like this.  The bright side is I learned quite a bit just having to navigate around natural obstacles, and with each hike I do like this one, the better at it I’ll become.  Particularly, maybe next time I’ll choose a route that isn’t the worst.  But boy were there some great views.

Failing sucks, but if it doesn’t happen every so often then you’re not pushing yourself to learn new things.. or something.  Final tally for the day was 9 miles of hiking and ~4,200 feet elevation gain.