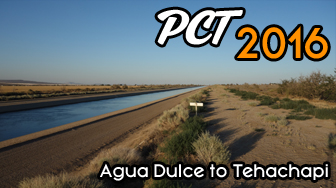 This one was fun.  When I got back on trail a heatwave was starting to roll through the area, leading all the way up to Kennedy Meadows basically.  I got one final send off (IE “Fuck you”) from the desert before making my way to the Sierra through this video and the next, and while in retrospect I have good memories of it… it sucked in the moment at times.  But there was some cool stuff despite all that:  Walking along the LA aqueduct, windmills, Tehachapi in general, and other things.

The trail has a habit of making weird shit happen.  Despite me having to leave the trail here and there a bunch of times for various reasons, I kept running into Exo.  After dipping in and out of heat exhaustion, feeling nauseous and not eating, doing the night hike and hiking on a few hours of sleep.. I was a little worn out.  I crawled my way through the windfarm and up the first climb back into the mountains, down into a little canyon, and there he was.  He convinced me to stop hiking for the day and just recover for the rest of the day, drink a lot of water, eat a lot of food, etc.  Had he not have been there I absolutely would have kept going and regretted it because there was no shade for quite a ways, whereas this place had a nice huge tree to chill out under and was right next to a stream.

Also I did not hate Hikertown.  It’s a a tad strange and the owners charge if you stay the night, sure.  But it had shade, chairs, and cold water that I didn’t have to filter, all of which were a godsend at that point.  I found it really underwhelming after hearing so often that it’s “So weird!“, it’s just a residence with mini-buildings and chickens/roosters.

I'm getting back into writing and using old hiking photos/experiences as like a writing drill cause I need a hobby. Bones ground to dust, muscles torn A man walks the desert, soon to be born Between the notches, summits, and passes off forgotten highways There is a place of rest The grass grows green and tall, the birds sing, the water dances and waves at passersby On the sandbar he falls, drunk from the desert heat This place stands still in time as he rests Think not of the pain, think not of the sun This is a place for the soul to run free Down the stream do your doubts run So take a drink, take a rest Becau- Oh... Oh my God there's mold in my water filter. #pct #pacificcresttrail #desert
I took this random picture walking down the road in Lake Isabella on the PCT in 2016. I had been holed up there for three days because I was so thrashed. I was ready to give up my thru attempt at that point, I was just so done with the desert. A heatwave rolled through on probably the most exposed section of desert (and certainly the dryest). It pretty much destroyed me and whatever notion I had of myself or my ability to complete this hike. It totally brought me to tears a few times. The desert is like the most elemental and beautiful environment to me, and this experience really brought that to my attention. It grates on you, it hurts, it dries you up and blows you away. You earn every moment you have out there. But it's also peaceful and lush in its own right and gives you a real appreciation for the smallest things. Bonus points for crazy unique and awesome birdsong and killer sunsets. Nothing I've done has ever come close to being as impactful as my hike through the SoCal desert, and I've been chasing that feeling since. So yeah I guess it follows that this year I'm totally going to the desert, and the Arizona Trail looks mighty fine. My season starts with some Utah mountain stuff in September, then I'm heading down to the UT/AZ border to start my hike. Im crazy stoked, but I have to admit my dumbass almost went back to the PCT again cause that trail is an addiction.
1 year off trail... can't say I was a fan of it. None of my old hobbies held up so I've kinda just been sitting on my hands the whole time wondering wtf to do with myself. This hiking season is gonna be a good one I think. I dunno where I'm going for sure just yet, but I am going and that's a wonderful thing.
The last decade was quite alright. Quite alright indeed. Why am I posting this don't hit share don't hit share don-
Sometimes you just have to pack up the ol' Corgi and hit the desert. Southern Utah what? I can't hear you over my superior western Utah. #utah #nature #desert #corgi #dog #saturnvue #goodvues #dirtroads
These mountains. I love them and I want to see all of them. #utah #hikeutah #wasatchmountains #bigcottonwoodcanyon #uintanationalforest